Receiving Provincial Grand Master Tony Harrison is one type of event most likely to put lodges on their mettle. So it proved at the installation meeting at Foxhall Lodge No 7484, where master elect John Aplin was due to be installed as a master for the first time. Some nerves were certainly jangling, though it didn’t show on Derek Lewthwaite, who was waiting in the wings and ready to star as the installing master. 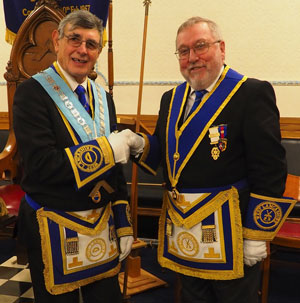 With the business dealt with and the lodge opened in the third degree, reigning master Bob Taylor welcomed Tony Harrison, who was introduced by Keith Kemp, the Provincial Grand Director of Ceremonies. Tony was supported by Assistant Provincial Grand Master David Winder, The Provincial Senior and Junior Grand Wardens Dave Asbridge and Clive Dickinson, along with South Fylde Group Chairman Ian Ward and a retinue of grand and Provincial grand officers from the Provinces of West and East Lancashire.

The gavel of the lodge was offered to Tony Harrison who thanked the WM and brethren for their welcome and gracefully returned the emblem of power to the master. Salutations were led by Keith Kemp and Deputy Provincial Grand Director of Ceremonies Jason Dell. These salutations received suitable responses and then the fun really started. Bob Taylor invited Derek Lewthwaite to take over control of the lodge as the installing master. Derek in turn invited Dave Asbridge to occupy the senior wardens chair, Clive Dickinson to occupy that of junior warden and lodge stalwart Jim Ellis to act as installing inner guard.

Master elect John Aplin was then presented for installation by his good friend Derek Abbot. The installing master delivered his opening address, then directed John Aplin to attend to the secretary Roy Sibley who read the ancient charges and regulations. 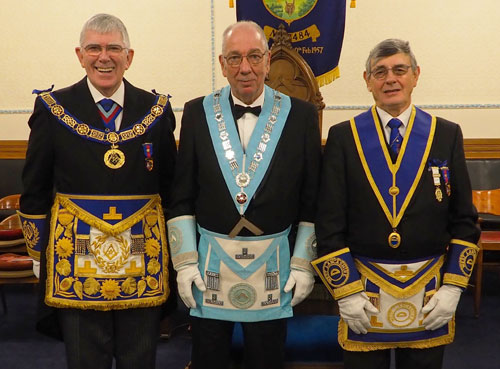 Pictured from left to right, are: Tony Harrison, John Aplin and Bob Taylor.

John then took his obligation as master elect and the past masters held conclave in order to place the new master into the chair of King Solomon. After these formalities were completed the proclamations were made by Derek Lewthwaite, the brethren saluted and greeted the new master and the working tools were explained by Frank Hardy in the third degree, Derek Lewthwaite in the second degree and Bill Routledge in the first degree. Derek’s rendition of the long version of the second degree tools being particularly well received.

The address to the WM was delivered with precision and aplomb by Ian Ward, who has for many years been a senior preceptor of the Fylde Group Lodge of Instruction No 65. This was followed by Kevin Reany who presented a past master’s jewel to Bob Taylor.

An excellent ceremony of installation was followed by an equally magnificent meal in the dining suite with toasts followed given after the meal. Following an introduction by David Winder, in which he told of the origins of Foxhall Lodge and the early leadership of its founders, who insisted that excellent ritual would be a must during all ceremonies, Tony Harrison told the brethren how thrilled he was to be there and to witness such a fine ceremony of installation.

Tony thanked the members and their guests for a very warm welcome and also thanked the grand and the acting Provincial grand officers for their support. He also thanked Ian Ward and his fellow group officer for all the hard work that they do. He continued by congratulating John Aplin on being installed into the chair and praised the work of installing master Derek Lewthwaite and his team for their truly excellent work. 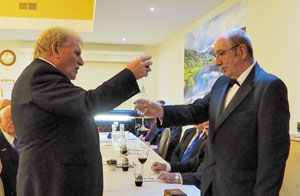 Tony continued by inviting all qualified members to attend the meeting of Provincial Grand Lodge on 19 April 2019. He also mentioned events in the new year, such as his presidency of the Emulation Lodge of Improvement in London on 22 February and the variety show entitled ‘A night with the stars’, which was being held at the Opera House in the Winter Gardens in Blackpool on the 6 April.

He also urged the brethren to support Provincial Grand Secretary Peter Taylor on his planned ‘Trilogy’ which consists of the Great North-Western Half Marathon in Blackpool, on 17 February, then the ‘Coniston 14’ around Coniston Water in the Lake District on 30 March. Peter will then swim, cycle and run to the finish line in Southport on 19 May to complete his trilogy. The proceeds of the sponsorship he will receive will be donated to the 2021 MCF Festival (80%) and Meningitis Now (20%). 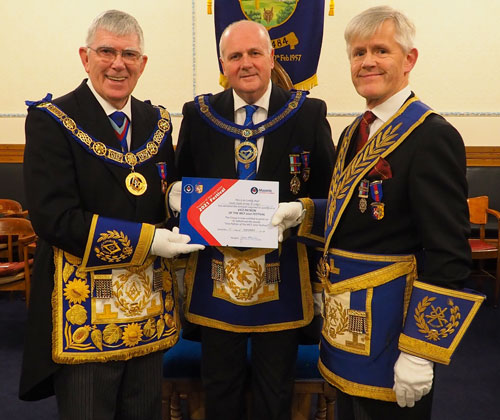 During the meeting, Tony had been pleased to present a certificate to David Winder and Ian Ward to mark the South Fylde Group’s achievement of becoming Vice Presidents of the 2021 MCF Festival and copies of the certificate celebrating this achievement are now being proudly displayed at the Masonic Halls of St Anne’s and Poulton-le-Fylde.

The Provincial Junior Grand Warden, Clive Dickinson, gave an amusing and enlightening reply to the toast to the Provincial grand officers. Then in his response to the toast to his health, new master John Aplin thanked the members of the lodge for the confidence they had shown in him. He also thanked everyone for their support on this occasion, particularly Tony Harrison and his supporting officers. John concluded by thanking the installation team for a fine ceremony.

The evening was brought to a fitting end by Vinnie Carte who proposed the tyler’s toast.