After over 50 years as a member of Lytham Lodge No 6915 Tom Fare, Past Provincial Grand Sword Bearer, was again installed as master of the lodge. Tom’s last stint in the chair of the lodge was in 1977, when he was installed by Tom Goodier. He is still around and presented him for installation on this occasion. 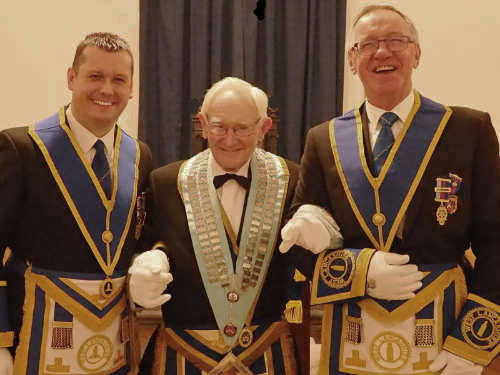 Here are some details of Tom Fare’s life history so far. Tom was born in June in 1938. His father was also called Thomas and was a farmer working at Stanley Grange Farm at Treales, the family farm. Tom was born in Kirkham and at the age of three moved to a cottage in Treales. Tom recalls having no running water and very limited toilet facilities.

Tom’s mother Edith acted as secretary for the local Women’s Institute and, there being no telephones, Tom would be tasked to take messages to the other members by hand. This he did on his prized pedal cycle. It may have been far too big for Tom, demanding wooden blocks on the pedals so that his legs could reach but it was Tom’s transport everywhere, irrespective of having no brakes! The payback for delivering messages was a hot drink and a great slab of homemade cake. Tom would also be tasked to ride into Preston to St Georges Road and take fresh eggs to his grandmother.

On leaving school Tom worked on the farm, his dad waking him up at 6am every day to travel about a mile on his bike to work. In time, Tom was to be found engrossed in every aspect of farming, particularly milking duties and mucking out in the cow sheds and pig stys.

Tom was a keen fan of Preston North End and recalls going to watch the games. He would sit on a rail on the cinder area adjacent to the pitch. If he was early and really lucky he got to sit on the steps at the Spion Cop. Later, Tom was to enjoy attending the Empress Ballroom at Blackpool, or the Public Hall at Preston. He was a keen member of the young farmers club and now went to dances on his trusty steed, now with a dynamo on the front wheel providing light. Tom had graduated to a new shiny ‘Humber’ cycle with brakes, 4 gears and handlebars that locked with a key! 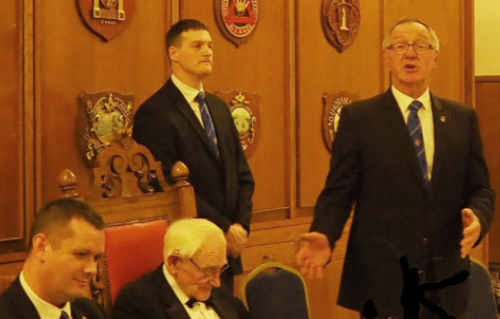 It was at such a dance age 20 years old when Tom met Christine Pickervance; the rest as they say is history as 3 years later they were married. After the ceremony at the United Congregational Church in Kirkham in 1961, they honeymooned at Tossa de Mar in Spain. That was trend setting in those days, when aeroplanes had propellers! The following years would see the couple exploring different areas in the Mediterranean. Travel in later years to Austria saw them develop an interest in skiing, becoming proficient enough to go on red routes. All went well until Tom crashed at speed one year into a log cabin fracturing his skull and breaking his collarbone. A later trip to Florida saw Tom bitten by what might have been a sand shark while jumping waves with Christine. David Winder remarked: “There seems to be a recurring theme here brethren. Everyone has the right to be unlucky but some people simply abuse the privilege! The lengths people will go to, to avoid going back to work!”

On marrying Christine, Tom managed Greenland’s Farm and more especially the 3,500 pigs that it held. Tom was also involved with the management of the 3 other farms that the family owned and the total stock of in excess of 10,000 pigs. Tom later decided to diversify slightly into breeding as prices for quality ‘weaners’ had risen. Tom’s stock rose to 1,000 or so and all was well until Tom and Christine’s family was thrown into turmoil by the 1962 and 1963 outbreaks of swine fever. All pigs had to be shot on site. They simply had to start afresh and build from scratch.

Tom subsequently became director of the company after Christine’s father Alf Pickervance passed away. It was then that Tom started breeding pigs at Hillock Cross Farm through to 2008 when he retired. Tom’s work with pigs saw him become chairman of the National Farmers Pigs Committee and National Pig Association.

At home and after 15 years of marriage Tom and Christine were blessed with their first son Richard. Then within two years and much to their delight, their son James arrived. It was when Richard was eight they heard of the intent to set up a local scout troop. Encouraged by Christine, Tom went along, helped to fund the troop and became its first leader. Subsequently, Richard became a patrol leader and both became immersed in fund raising for its growth and support. Tom now has two grandchildren, Ben and Annie, involved in cubs and rainbows, so the legacy flows into the next generation. 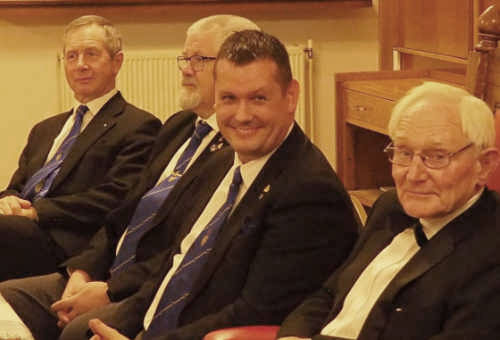 Tom’s father-in-law Alf Pickervance was a member of Hesketh Lodge No 950, Kirkham Lodge No 6615 and Tarleton Lodge No 7871. He was not, however, the specific conduit to Tom joining Freemasonry. It was in fact his brother-in-law Bob Brewer, a member of Lytham Lodge who proposed him. Tom attended his ladies evening in 1960 at the Clifton Arms, his very first outing to a Masonic function, that being the same for Tom’s longstanding friend Tom Goodier. It would however be six years later before Tom was initiated on 7 December 1966. John Lee pointed out later in the evening that Tom was the last person to be initiated at the County Hotel, shortly after that the lodge met at the Clifton Hotel where Lodge of Triumph No 1061 also met.

Tom’s continued commitment to Masonry is shown by his work as lodge almoner, a post that he carries out in John Lee’s words: ”With grace and dignity.” Anyone who has been an almoner will know that time and hard work come into the equation too. Tom’s hard work was recognised by his appointment to Past Provincial Grand Sword Bearer on the same night that he celebrated 50 years in Freemasonry, a rare honour. Tom received several plaudits for his commitment to Freemasonry during speeches at the banquet that followed the meeting.

Toasting Tom’s health, John Robbie Porter began an emotive and heart-felt speech by saying that when Tom was born they threw the mould away. Speaking of Tom’s work as almoner John Robbie spoke of the distances that Tom will travel to visit lodge widows, and Scotland was just one of the countries mentioned. Outside of Freemasonry Tom was also involved in actually driving relief convoys to Rumania during their economic crisis in the 1990s. In all John described all that Tom does as carried out with modesty, grace and humility.

The master’s song was performed by Godfrey Hirst who had been Tom’s family priest over 40 years ago. He still has connections with today’s generation of Fare’s. Needless to say, Godfrey performed the song with gusto and joy. Tom thanked everyone for their attendance and for helping out. He said that he felt comfortable in the chair as it’s the same actual chair that he sat in in 1977, the first time he was installed at the Clifton Hotel. He also exhibited the Nigerian ritual book that he had worked to on that occasion.

The evening was brought to a conclusion by John Robbie Porter, who proposed the tyler’s toast. 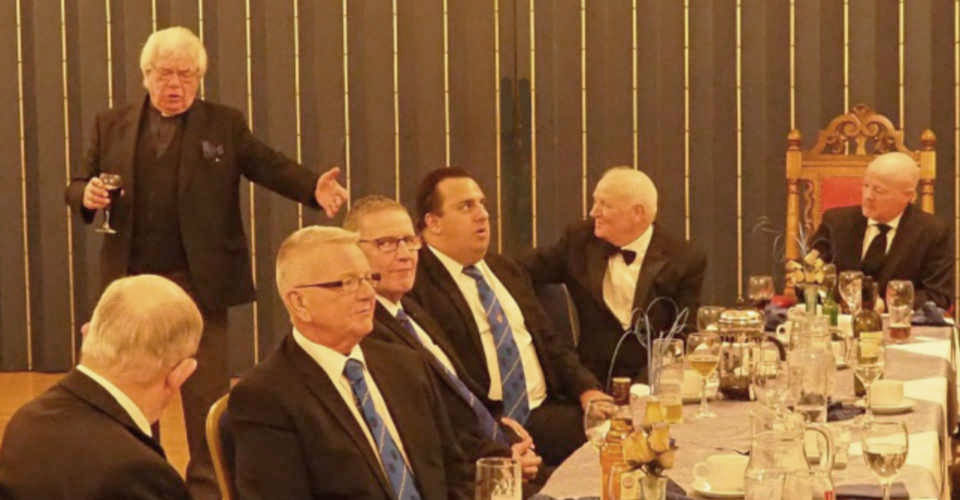