Mike reigns for the third time 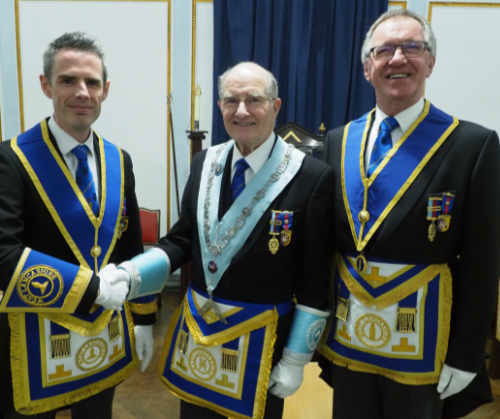 In an excellent ceremony headed by installing master David Jenkinson and his father John Topping, some inspiring addresses were delivered by Regional Charity Steward Ted Rhodes, Provincial grand officer Noel Dentith and a very promising young brother, William Buchanan. The address to the master was performed in his own brilliant and inimitable style by Brian Pearson, with addresses to the installing officers by Ian Stirling, Alan Dentith and the irrepressible Liam Bird. The final address, that to the brethren of the lodge, was delivered by David Edwards in his own precise and authoritative style.

Mike Boxall was born in August 1943 at Catterick Camp, North Yorkshire. His father was Regimental Sergeant Major of the Royal Signals who had been wounded at Dunkirk serving with the British Expeditionary Force and considered himself lucky to get out of that mess alive.

Mike left school with six GCE O-Levels, He then went onto achieve a Higher National Certificate in Production Engineering, He also continued his education by pursuing work study qualifications. He is married to Elisabeth who is his second wife, who he met through his love of dancing. This was explained by David Jenkinson during his speech later in the evening. Mike had a daughter who sadly passed away at the age of 38 from diabetes complications. He also has a son aged 42 who is a Contract Aircraft Engineer working between Canada and Mexico, having previously served with the Royal Air Force. Mike also has two grandchildren, a grandson aged 20 and a granddaughter aged 18. 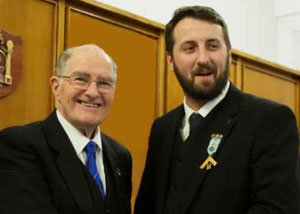 Mike Boxall (left) has just presented a past master’s jewel to David Jenkinson.

Mike’s other family members include three brothers and a sister. His elder brother is a Freemason who lives in Australia. One younger brother is a Micro Electronic Services Engineer who owns his own business. Mike’s sister is the Financial Director in that business. His youngest brother is a contracting electronic engineer. All three live in Surrey.

Mike’s own professional history started as an engineering apprenticeship with Vokes Filtration in Guildford. He then moved to Vokes Burnley in 1971. He left there in 1973 and joined Tweedy of Burnley, who were bakery equipment manufacturers specialising in making giant dough mixers. He left there in 1983 and joined Fine Art Developments, who were a greeting card manufacturer, producing in excess of 1,000,000,000 cards per year. He worked there until he left in 1998 and joined Blackpool Printers, where he continued to work until he retired in 2011.

Apart from his Freemasonry, Mike spends his spare time playing golf, fishing and teaching ballroom and Latin dancing. He was initiated into the Lodge of Harmony on 24th March 1981. He was then exalted into Loyal Todmorden Chapter No 288 on 5th February 1985. Freemasons will note that the chapter carried the same number as the Lodge of Harmony. This is due to amalgamations. The Chapter has further changed its number to 219 for the same reason. The delegation from East Lancashire included Ian Allison, Brian Smith, Ken Lambshead and David Hegginbotham, all of whom are Mike’s friends being connected to the lodges and chapters mentioned above. 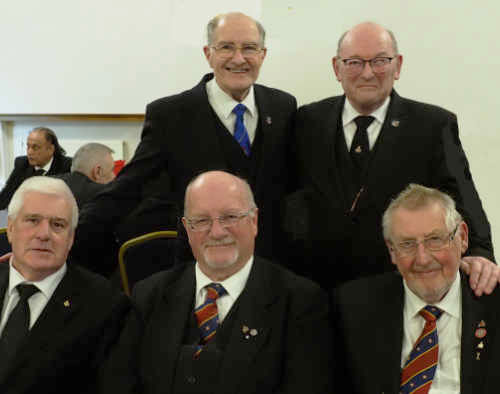 The whole evening went very well and those responsible for the smooth running of the event were congratulated by David Edwards during his after-dinner speech. In it, he particularly praised the father and son installation team, along with lodge secretary Brian Horrocks for his preparatory work behind the scenes. David also thanked the group chairman and his group officers for their attendance and the work they do behind the scenes.

He further praised the lodge members for the following charitable donations; to the 2021 MCF Festival £1,250, Women’s Aid £300, Young Carers £300, North West Blood Bikes £250, National Association for Crohns and Colitis £300, The Den (Children’s Domestic Abuse Advisor Service) £200, Rosemere Cancer Foundation £300, Homestart £200 and RNLI St Anne’s and Lytham £250. A sum of nearly £500 was collected on the night by way of donations and a raffle. A great start to the new master’s list.

Mike responded to a very informative speech by David Jenkinson by thanking everyone for their attendance, particularly his long-standing friends from East Lancashire. He thanked everyone in the installation team for an excellent job and went on to outline his plans for the coming year. These included a Sunday lunch, a bowls competition and a summer ball.

The evening was concluded as ever by the tyler, Ken Turner, who proposed the final toast.

Peter Robinson (waving) spots the photographer in the dining room.